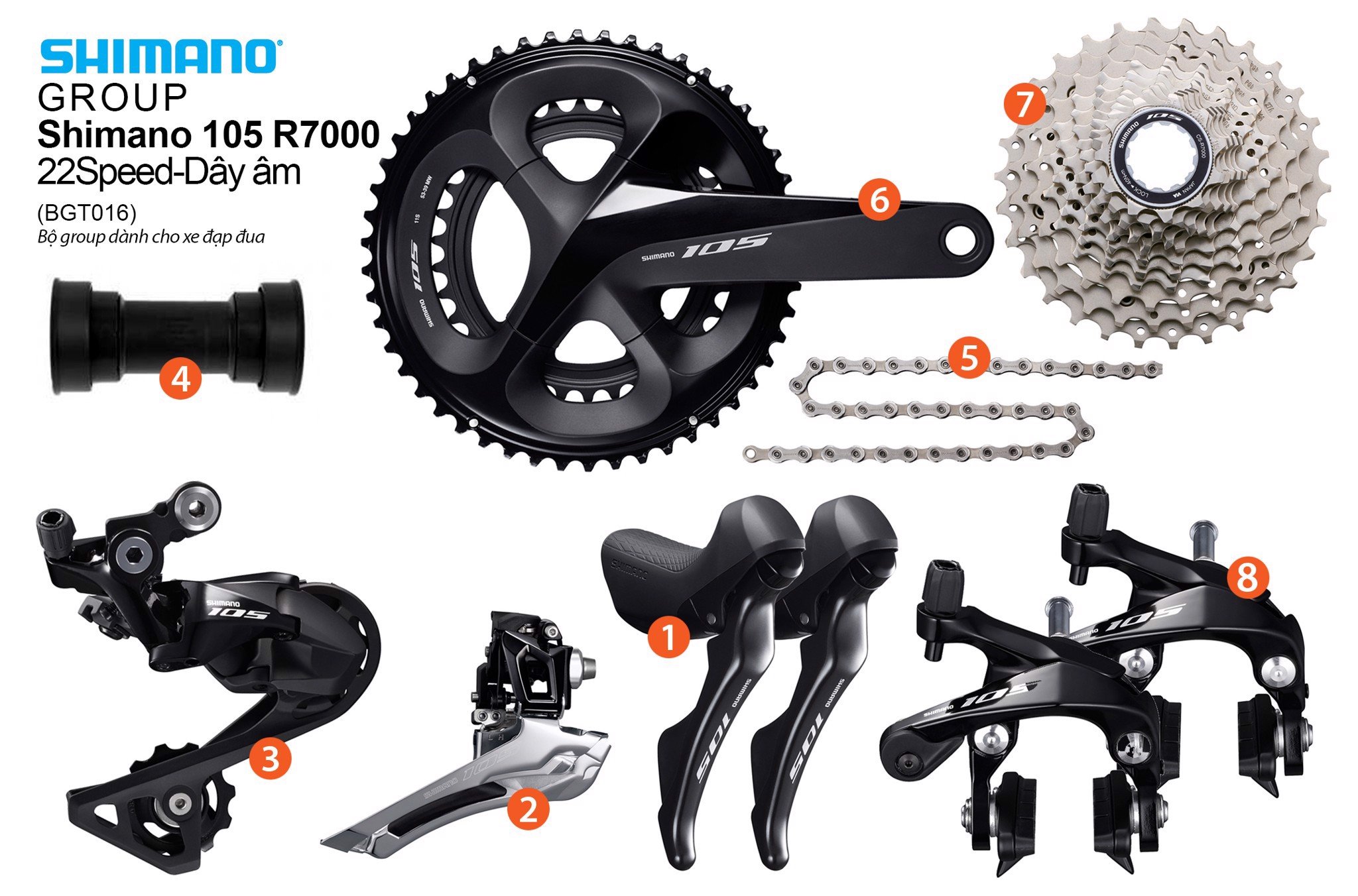 SHIMANO 105 R7000 Series will empower more riders than ever before to embrace the sport of road cycling. It will become the supportive groupset that beginner riders choose to help them train for, and ride in more serious races. By combining trickle down technology with a greater accessibility, SH...
Thêm vào giỏ Hết hàng

SHIMANO 105 R7000 Series will empower more riders than ever before to embrace the sport of road cycling. It will become the supportive groupset that beginner riders choose to help them train for, and ride in more serious races. By combining trickle down technology with a greater accessibility, SHIMANO 105 will continue to motivate and inspire more riders than ever to go after greater challenges.

Overall, you're looking at a full system weight that's about 200g heavier than Ultegra 8000, and you can save yourself half a kilo by going all the way to Dura Ace at the top of the mechanical tree. Here's a chart of how the weights of the different components stack up.

Is it worth spending the (significant) extra money to get Ultegra over 105 these days? Not in my opinion, for the riding that I do. It's nice to have shiny things, of course, and I'd much rather you spent your disposable income on bike parts than pretty much anything else. But speaking as a third-cat racer with a limited budget, I'd say this is as good as it gets in terms of bangs per buck right now. In terms of functionality there is no compromise here: this groupset is better than Dura Ace was a few years ago, for a fraction of the price. There's no aspect of its performance that would be meaningfully improved by going one rung up the groupset ladder. You'd just about be able to tell the difference in a blind test if you went up to Dura Ace – and you'd save half a kilo, which isn't insignificant – but you'd be spending more than twice as much.

The weight savings aren't spread evenly. If you were looking at getting some Ultegra bits You'd be hard pressed to justify upgrading from a 105 chain, for example, to net the 3g weight saving that gives. The biggest saving in absolute terms is the Dual Control levers (62g) and the biggest in terms of percentage is the cassette (17% lighter). The second is interesting in that the cassette is often a place where bike manufacturers spec down as it's not an obvious downgrade.

The new 105 groupset is better than the outgoing 105-5800 system: the shifting is improved and it gets nearly all the innovations from the more expensive groupsets. But it remains the case that 105-5800 is a really excellent groupset too and the release of 105-7000 will mean there are bargains to be had out there. Currently, looking online suggests that the new 105 is about £150 more expensive right now than its predecessor. Is the new groupset £150 better than the previous one? It's a pretty marginal decision, unless you're looking for the extra capacity from the GS mech and wider range cassette. If you're buying a new bike with this groupset already fitted, though, then rest assured: it represents stellar value for the near-flawless performance you get. In terms of bangs per buck, this is as good as it gets.